In spring of 2021, several faculty members at the Conservatory of Music are celebrating significant years-of-services anniversaries or retiring after many years of bestowing their knowledge and passion for music to generations of the conservatory students. Join us in honoring their achievements and impressive legacy. 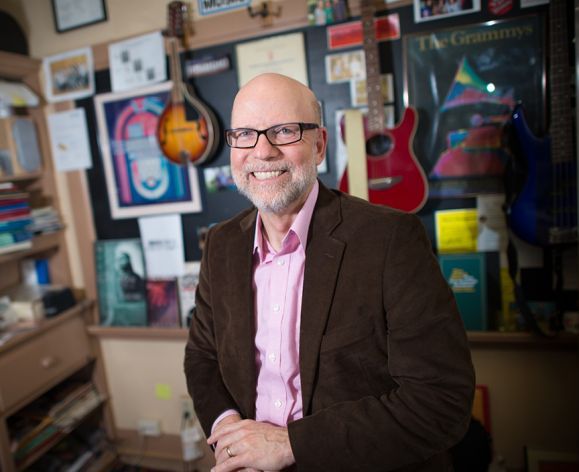 In spring 2020, Keith Hatschek retired as program director of Music Management and Music Industry Studies at Pacific but remained active as a member of the conservatory faculty until his upcoming retirement in May of 2021.

Professor Hatschek joined the Pacific faculty in 2001. Under his watch, the conservatory initiated such programs as “Back Stage Pass,” a scholarly music business journal written and edited by undergraduate students that has developed a global readership; Pac Ave Records label which has just released its ninth record this spring; and the Music Management Advisory Board composed of a broad set of industry leaders, company founders and entrepreneurs who provide advice on curriculum and mentoring for students.

Hatschek and the Advisory Board were the driving force behind the development of Pacific's innovative Music Industry Studies program, the first degree of its kind in the region. Today, this program is one of the fastest growing at the conservatory.

Before joining Pacific, Hatschek had a full career as a performer, a songwriter, a recording artist and a producer. From 1995 to 2001, he headed Keith Hatschek and Associates, a San Francisco Bay Area-based marketing and public relations firm serving the entertainment and media technology industries. He is also a recognized scholar of the life and work of Dave ‘42 and Iola ‘45 Brubeck as well as a published author of several books and dozens of articles on the music industry.

While Professor Hatschek transitions into his retirement from Pacific, he does not intend to retire from his passion for music and writing. His latest book, “The Real Ambassadors: Dave and Iola Brubeck and Louis Armstrong Challenge Segregation,” will be published in February 2022 (University Press of Mississippi) and tells the story of the struggle to bring Dave and Iola Brubeck’s socially conscious jazz musical to the stage. Hatschek’s other research projects in the pipeline include one on the sound engineers of Motown and a music tourism book.

His advice to current and future students of music industry and music management is “to stay curious. For my own career, I was drawn to learn new things like audio engineering, because I wanted to know how to shape the sound of a record. There are so many opportunities today to develop new and innovative ways to connect artists and audiences, and the students who are driven to take deep dives into the areas in music that interest them will find success. And remember to stay connected! Pacific has an active and engaged group of alumni at music firms all over the nation. They represent a unique network of advisors and coaches for our students and young alumni.”

Sabine Klein has been a collaborative pianist and coordinator at Pacific for 20 years. As a member of the conservatory faculty, she has performed in numerous student and faculty recitals. As a performing pianist, Klein has played for the Pittsburgh Concert Society recital series, the Norwegian National Opera’s chamber music series, and in performances in Spain, Germany, Austria, Sweden and the United States. 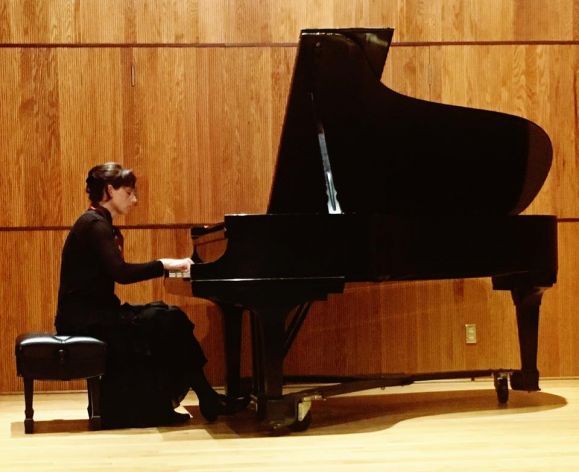 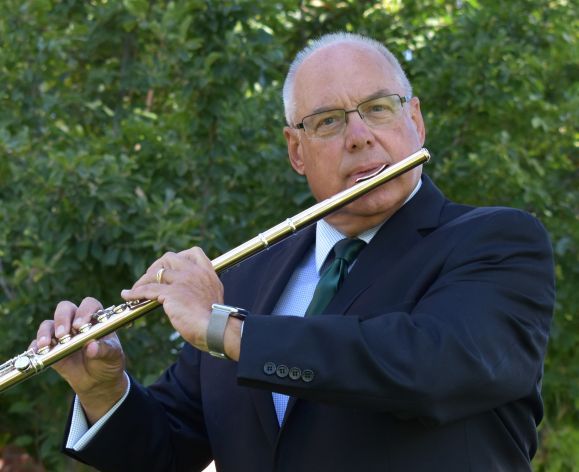 Associate Professor of Practice in Flute and Chamber Music

Professor Mathew Krejci is retiring from his position as associate professor of practice in flute and chamber music at University of the Pacific’s Conservatory of Music after over 30 years.

Krejci is proud to mention that there have been only two flute professors at Pacific in the last 50 years, himself and previously retired professor Carol van Bronkhorst. During his long career, Professor Krejci made many unforgettable memories but at the top of his list are Pacific Arts Woodwind Quintet’s performances in the U.S. and Panama as well as many international voyages with conservatory students.

“One of my favorite memories is when I left my gold flute on a luggage turntable in the Frankfurt airport, Germany. I had to play "Valkyrie" for the German TSA to get it back!” recalled Krejci.

As a musician, Krejci has served as principal flute with the Sacramento Philharmonic Orchestra, the Chamber Music Society of Sacramento, and was formerly with the Sacramento Symphony. He has performed with the Spoleto Festival Orchestra, at the Slovaks Living Abroad Festival in the Slovak Republic, and as a soloist in Prague, Czech Republic. Since 2003, he has been a member of the Wild Basin Winds, a woodwind quintet based in Austin, Texas. In the last few years, he has performed in Prague, Bratislava, Abruzzo and Viterbo, Italy, Beijing, Shanghai and Panama.

Upon his retirement, Krejci’s advice to young musicians is “to treasure all the friendships one makes along this beautiful journey. You never know when an old friend might re-appear.  I was blessed with some talent, but there is always someone more talented than you. There is no substitute for hard work: practice, practice, practice!” 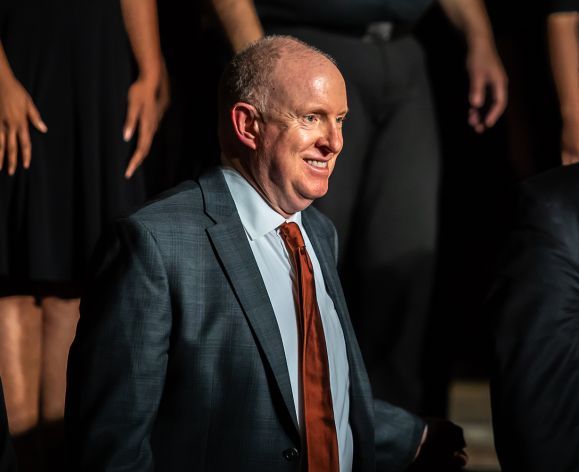 Professor Burr C. Phillips joined the conservatory faculty in the fall of 2007. He announced his retirement as associate professor of voice to commence in May 2021.

At Pacific, Professor Phillips has coached students in voice and lyric diction as well as assisted in the productions of Pacific Opera Theatre, at times taking up a vocal part himself.
Many of his students went on to study in prestigious opera schools such as Academy of Vocal Arts (AVA) in Philadelphia, and started successful vocal careers performing in prestigious opera houses in the U.S. and abroad.

Most recently, Mezzo soprano and Phillips; student Hannah Ludwig ’14 has received rave reviews during the early part of her professional opera career, which has led to a prestigious honor: the inaugural Stephen De Maio Memorial Award.

“I truly enjoyed working with Burr Phillips, and we remain close to this day,” said Ludwig. “My foundational skills were built and I was set up to succeed because I went to Pacific.”

As a bass-baritone, Phillips is a seasoned performer having appeared on renowned opera stages in Dallas, Houston and Tulsa, just to name a few. He sang with the Dallas Symphony, Royal Philharmonic (London), Fort Worth Symphony, Honolulu Symphony and San Antonio Symphony. Phillips has also performed locally for the Sacramento Opera and the Stockton Opera Association in roles ranging from Benoit/ Alcindoro in Puccini’s La Boheme to Dr. Bartolo in Mozart’s Le Nozze di Figaro. 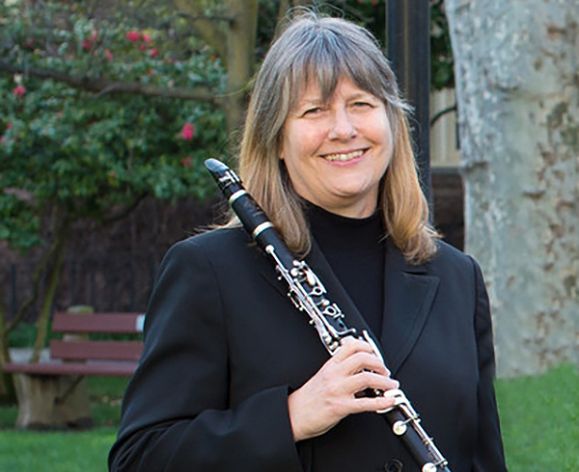 Patricia Shands joined the conservatory faculty in 1995. She serves as professor of clarinet and director of chamber music inspiring her students and colleagues alike with her talent and work ethic.

As an active clarinetist, Professor Shands has performed to popular and critical acclaim throughout the United States, South America and Europe. In addition to her solo and chamber performances, she is currently a member of the Stockton Symphony and Sacramento Philharmonic orchestras, and performs with Pacific Arts Woodwind Quintet, a faculty resident-artist ensemble at Pacific.